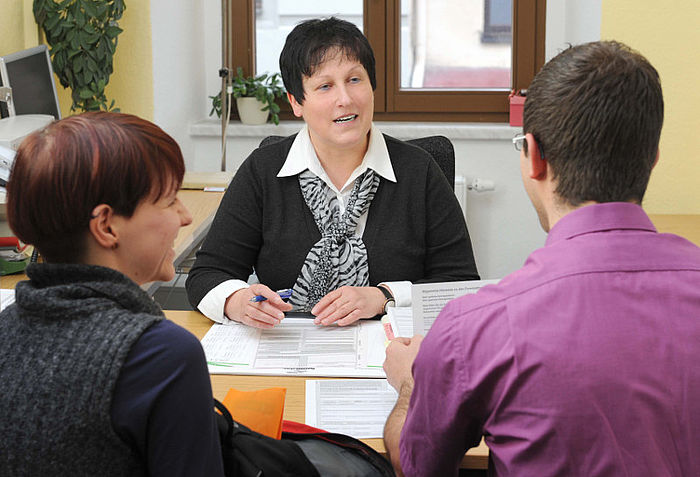 Updating the income of spouses or parents

If their income situation has deteriorated in the current period compared to the year before last (e.g. due to unemployment or retirement), the current income situation in the calendar years affected by this approval period (BWZ) can be taken as a basis upon special application (Form 7 is required). This calculation is also only possible for one parent.

In this case, the income is not based exactly on the months affecting the BWZ or from the month of the income reduction, but the provable as well as the expected income of the calendar years affecting the BWZ, e.g. 10/2017 - 09/2018, are credited once for the year 2017 in 3 shares and for 2018 in 9 shares, so that a fictitious income amount results. The Office is bound by this method of calculation on the basis of the regulations in accordance with § 24 (4) BAföG.

The decisive factor is that the grant amount increases by at least € 10.00 per month.

The payments are initially made subject to reclaim. Only when the income from the calendar years of the approval period has been fully proven will the training grant be finally calculated. In individual cases, this calculation can then lead to a reclaim.

However, our consultants will give you detailed advice before you submit this application.

Change of specialisation and discontinuation of education

At this point we do not want to list all facets of the regulations for funding after a change of study subject according to § 7 para. 3 BAföG. However, you should know the basic features. If students have decided to discontinue their studies or change their field of study for an important reason or for an unavoidable reason, funding is provided for a different study subject. In the case of students at higher technical colleges, academies and universities, an important reason for the change is assumed if the first change of subject is made after 2 semesters at the latest and no reason needs to be given for the change. As a rule, further support continues to be provided in the form of half subsidies and half interest-free loans.

Only in the case of a further change or a change after three semesters is it necessary to explain the reasons why the study subject was changed again or only at that time. Please use the following form to explain your reasons. Further details can be found in the information sheet.

Here you should definitely give good reasons why the change took place so late! Anyone who could have realised earlier, e.g. by failing some exams in the first and second semester, that he or she is unsuitable for the chosen subject, can no longer rely on serious reasons.

If a student breaks off or changes to another subject after the beginning of the fourth semester, educational support for another course of study will only be granted if there is an unavoidable reason for the discontinuation or change. This also applies if no application has been made for a grant for the previous study programme.


The only non-refusable reason is a reason that does not allow a choice between continuing the previous education and discontinuing it or changing to another subject. An unavoidable reason is then, for example, an unexpected disability - as a result of an accident - or an allergy to certain substances which makes it impossible to pursue the occupation previously aimed at.


Multiple changes of study subjects for an important reason have negative effects on the type of support. The semesters "used up" by a previous course of study are credited to the number of semesters of the new maximum duration of support and are only supported with an interest-bearing bank loan.


We therefore recommend that you find out as early as in the first two semesters of your chosen study subject whether this course of study corresponds to your preferences and whether you are able to meet the requirements.

During the first four semesters, BAföG funding is generally paid without a performance test. It is only at the threshold of the fifth semester that a check is made as to whether the academic achievements to date correspond to the normal level of achievement. These certificates are issued by certain teachers.


It is advisable to have the performance level at the end of the 3rd semester confirmed and to submit this certificate to the office in the first four months of the 4th semester in order to ensure that the subsequent funding is as complete as possible!

If, for serious reasons, you are not in a position to prove the required level of performance on the form 5 provided for this purpose, you can apply to postpone the date of submission of the certificate of performance. The corresponding application can be downloaded here.

The Office for the Promotion of Education and Training may also allow the certificate of suitability to be submitted at a later date if facts exist which are likely to justify a later exceeding of the maximum funding period. Such facts may be considered:

The discount may not exceed one semester in total for the respective periods, even if several children are cared for at the same time. It can be distributed to both studying parents. In this case, the parents must make a statement on how the childcare was divided between them.

Even in the case of previous training abroad, it is possible to present the certificate of performance at a later date.

BAföG during an internship

Please note the following information about BAföG for students during the internship.

Consultation in Mittweida, house 3, Am Schwanenteich 8:Tuesday, from 10:00 - 13:00 from September to January: weeklyfrom February to July: every first and third Tuesday of the monthIn August, no consultation hours are offered at any of the two locations.