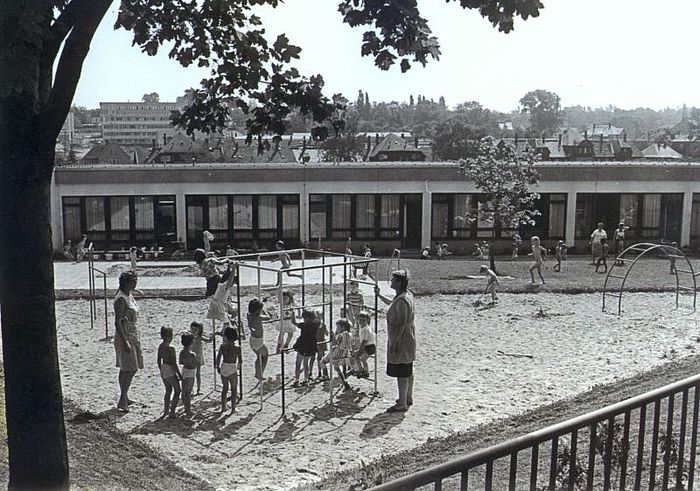 The nursery emerged from the crèche of the Bergakademie Freiberg-Winklerstraße and the company own kindergarten of the TU Freiberg-Hornmühlenweg. The former 4-group kindergarten and the 8-group crèche with 122 children were restructured into a day nursery.

1999: Installation of a solar system for hot water supply

2001: Installation of new blinds and increase of capacity to 60 children

2002: the first part of a planned, complex renovation of the entire facility took place. The outer facade adjacent to the garden was modernised. New windows and balcony doors were installed. The facade was provided with insulation and paint.

From October 2003 to February 2004, the second part of the refurbishment began with the renovation of the interior of the nursery. This included the conversion of the heating to underfloor heating, the new electrical system, sanitary and plumbing area, partially suspended ceilings, new windows in the front area of the kindergarten, new doors in all rooms and wallpapering and painting work, new entrances from the garden side.

The third part of the renovation began in March 2004. An extension took place in the former entrance area (foyer). The new building contains a multi-purpose and movement room, an office, a baby carriage and storage area, a workshop for the caretaker, storage room, toilet.

With the reconstruction of the nursery, the children and educators now have access to state-of-the-art play, working and recreation conditions.