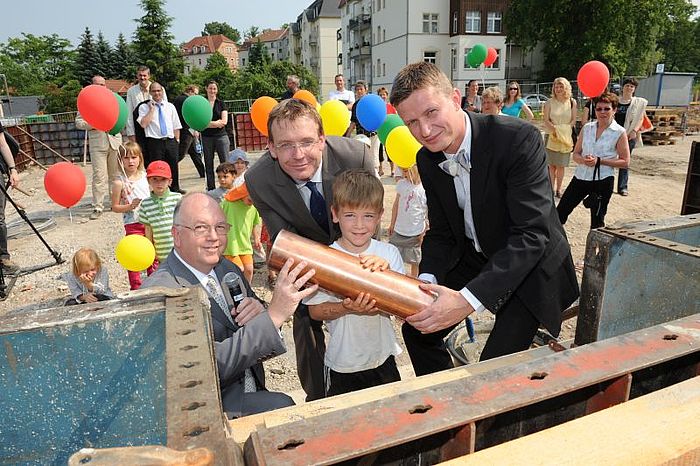 When the Winklerstraße was newly constructed in the 50s and the dormitories as well as the Great Lecture Hall were built, a small park was planned for the square next to the dormitory Winklerstraße 12. Whether it was ever built can no longer be determined today. What is certain is that in the seventies a so-called assistant dormitory was built on this site. Due to the housing shortage at that time, the Mining Academy had built such a dormitory, which consisted almost exclusively of one-room apartments. Here young employees of the Mining Academy could move in and stay until they had founded a family or were assigned another apartment.

This dormitory was demolished in 2008. Now the question arose as to what this place should be used for. The property was used by the TU Bergakademie Freiberg, owned by the Free State of Saxony.

At the same time, the Studentenwerk Freiberg planned the extension of its existing day nursery. Soon, however, it turned out that the extension would be much too small and much too expensive. At that time there were about 50 children on the waiting list of our kindergarten. In talks with the university and the city of Freiberg about the location of a new kindergarten, the area between Winklerstrasse and Möllerstrasse became apparent. The Saxon real estate and construction management as administrator of the properties of the Free State of Saxony did its part to convert the area into a heritable building right of the Studentenwerk Freiberg and on 01.06.2010, the children's day, construction could begin.

Also with the financing of the building estimated with scarcely 2 millions € all assisted. The biggest part with 1.2 million € was taken over by the city of Freiberg, which will later also pay for the majority of the operating costs.